Craig Dontas: “Whatever you get, you need to deliver 300% back”

Our years in the motorsport industry have shown us that the biggest struggle for young drivers is sponsorship. Not just simply finding the money, but also how to leverage those partnerships to make these associations profitable for all involved.

Rhys took the opportunity to sit down with the Sponsorship Manager for the Virgin Australia Supercars Championship, who also just happens to be a SuperUte racer and InSyde Media customer, Craig Dontas to discuss his tips for young drivers to better approach their own sponsorship from his years of experience in the sport.

Craig has a unique understanding of how sponsorship actually works from both the competitor and the commercial point of view, having built long-lasting relationships with sponsors from his time as a Business Development Manager for the organisers of the Adelaide 500 before becoming involved with Supercars sponsorship as well his career as a driver stretching back to 1999.

From your experience, what’s the shortcoming young drivers face with their sponsorship?

I think the biggest thing is hard work. I don’t believe there is a huge amount of young guys out there are working hard enough at it and that’s not being horrible, they just think it comes easily.

There are a couple of guys in the junior ranks who do it well and there are other guys who don’t. They fall into this trap of doing driver training or doing the day to day stuff as a full-time driver but they aren’t really working on the business side.

It’s a business number one and secondary its sport. So I think the biggest words and advice I can give, is to treat it as a business and run it well because at the end of the day you are wanting someone to pay for your hobby and interest. But if you run the business right there is a genuine career to be made out of it. So that’s probably the thing that is most important.

So how can young drivers better approach sponsorship?

The key and critical things are to learn the objectives of the company and then work to those objectives.

Literally, from the outset, work out what those objectives are and then you’ll be able to work towards them. If you just go in half-arsed, you’ll never going to really truly be able to give them return on their investment.

So firstly pinpoint that. Number one, is it branding? So working with your sponsors that way.

Secondly, if it’s over and above branding, what is it that they want to achieve? Is it sales stimulus? Is that a B2B stimulus? Or is it from a retail sales point of view?

You can have a B2B partnership where they really don’t want to engage the retail sector but they want to use their sponsorship to gain access to further partners and like-minded companies.

For instance, with one of our deals, it’s about putting together fleet programs. So where you’ve got a sponsor that’s on your car that they have access to so that they can then sell a product to etc, particularly its trade style business.

So working with like-minded companies that are there for a reason and that’s to grow and engage sales.

What’s the best example of where you’ve engaged those objectives with a sponsor?

Eight or nine years ago, I sat with the guys at one particular equipment company and that was a pretty big thing that we worked on.

They were really struggling. They were getting smashed out there, but they were also a newcomer, so they needed to build trade loyalty. However, they were probably going about it in the wrong way, taking the short-term approach of targeting current active users, the type of user that was anywhere from 30 to 50 years old, but that was pretty silly.

We got them to go about it in another way and looked things a little more long-term and shifted the focus towards the kids who are 13, 14, 15 at the time and were finishing up high school and going on to studying trades where they would be fully fledged tradesmen in the next five years and then maybe in the next seven to ten years own their own small to medium business with their own fleet of people on the ground.

So we went and teamed them up with an energy drink company and a freestyle motocross crew and we went did V8 Utes.

We did a whole lot of other things and built these programs externally away from the race track as well. We took promo girls and cool sampling stuff to high schools and trade schools and we built this brand with them.

We turned them from number seven in the country to number one and made it a massive brand.

So now they are almost like a marketing company but their side project is selling equipment and now they’re the leaders in the pack.

A bit like what some of the energy drink companies do really well.

What should young drivers keep in mind when pursuing sponsorship?

I believe whatever you get, you need to deliver 300% back. That way you’re always going to do a good job. 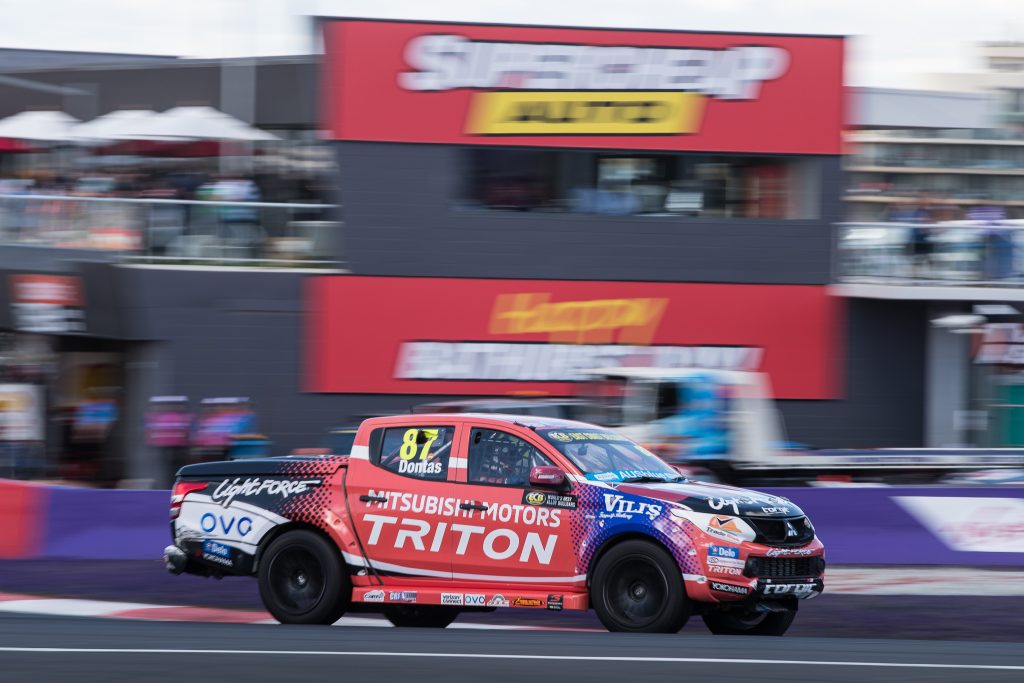 So how can young drivers better activate their sponsorship?

I think stickers on the cars are literally your eight or so rounds a year, and that works from a branding point of view, but it’s what you do in between that’s more important.

Again, it’s working out the objectives, so, for instance, your sponsor is a big company you could work on little things like customer stimulus and things that are fun, like team bonding events.

Things like go-karting events. We’ve had a huge amount of success on national go-kart campaigns and some of these are purely internal ones where we come in and look after some clients while they are racing the driver.

They so much better than ride days. Cheaper to run, it’s something that is low cost and high yield. They smoke a ride day over and above.

At a ride day, you’ve got insurances, catering, hiring the track, crew and wear and tear on the car so you’re looking at $10,000 to $15,000 and you might service 100 people. But you don’t actually get to spend any face time with them because you’re in the car doing the laps.

A go-kart event is going to cost you maybe $1000, you can have 30 people there and be able to engage with them. You can have a bit of a talk with them, work out why they are there and getting people working together, then you just start to see the creative juices flow.  You can even have a beer with them after.

It’s something that works across staff stimulus, retail campaigns, social media led campaigns or even as an internal sales focus. It’s even something that can even increase productivity across the workplaces as well and that is one thing I think is worth its weight in gold.

Ok so go-karting events are the way to go, but what else beyond that?

Other ones that work pretty well are just little things like displays. Giving sponsors access to your IP between events.

If you want mass things, you can even get them to spend more money in the sport.

So like at Newcastle we had one sponsor come in and do an activation, bringing them out of their traditional setup. If you look at your sponsor and if they are doing traditional stuff like 4×4 shows or field days bring that to a different audience.

We brought them to Newcastle and its the best activation they’ve ever had in the history of their company. We were doing a lot for them anyway, but now this is the next phase of what we are doing with them.

It’s not being selfish either. If you run and maintain your sponsorship well, you can share it around.

So with another sponsor, they have really started to move forward recently but were struggling with mass brand awareness. I said you’re are doing a bit of stuff with other sports and that, so why we do this with trackside and TV advertising packages.

Now I could have said just give us more money to run a second car. But now their spending money across a variety of things.

So you’re now being the good guy where you are controlling your own destiny and controlling their portfolio which also helps them have more confidence in you and that actually care where the money is going and where their brand is being seen as well.

I suppose that’s probably another thing is how you activate those sponsorships and not being selfish and sharing it around a bit to get the best outcome. Recognise opportunities to compliment what you are doing.

When it comes to race weekend, what should young drivers be doing to build those relationships with sponsors?

It’s all good to have them there, but its more about giving them touch points to the team so they feel like there is ownership.

Having 10-12 people a day doing pit tours etc. Just make sure you’ve got an esky with some drinks in it so they always feel like they’ve got a base to come back to as well. Just give them the love, you know, one on one time.

Also, spend a bit of money to make a bit of money. If they’ve eight people, but you’ve only got five tickets in their agreement, just get the other three tickets, just make it happen.

Corporate is great but it’s expensive, so if you are going to do that work on who those people are and build that in and then you can line them up into corporate which is a shared facility so they can actually network with other customers. Maybe pinpoint eight clients that you feel that would be in there they could get some face time with and actually get up there and help facilitate the introduction.

Another key thing is communication, always answer your phone and always return their calls. If you can’t do it, get someone there who can.

That’s where a lot of the kids struggle, they get to the event and they focus on their social media and driving the car, but they forget that they can actually shut off from that and go and get some work done with their sponsors as well. It’s not easily done, but it also gives you a good focus.

I think the other way to activate your weekend is to, and this is from a personal/driving point of view, is to enjoy it.

When you are there don’t put pressure on yourself you enjoy it more.

I think when you enjoy it and you’re relaxed, number one your body language is portrayed to your partners, but it also filters back across into your driving and I reckon you drive better.

So it’s all those little things. It’s not just about the business, it’s about yourself. Just breathing, relaxing and having focus.

You can do that while still activating with your sponsors by having and running to a proper schedule. You might say “Hey I’m really sorry, but I need to be here in half an hour to prep for the car”, people will respect that but then make sure you come back to them. It’s probably about the wholistic point of view.

According to Craig how you best activate your sponsorship is everything you do. From the car on the track to the lead into the event as well as then maximising what you do away from the track as well.

← Building Your Own Personal Brand How to Ask Businesses for Money →
