Adelaide based racer George Gutierrez is looking forward to heading up to Townsville for the first time with the Toyota 86 Racing Series.

Sitting just outside the top ten in the championship standings, Gutierrez hasn’t been dormant in the ten weeks since the opening round at Phillip Island back in April.

Also racing in the state level Improved Production Racing (IPRA) series, the young South Australian took to the brand new The Bend Motorsport Park at Tailem Bend for the first time during the break between Toyota 86 Racing Series rounds in second Toyota 86 race car prepared by his family team. 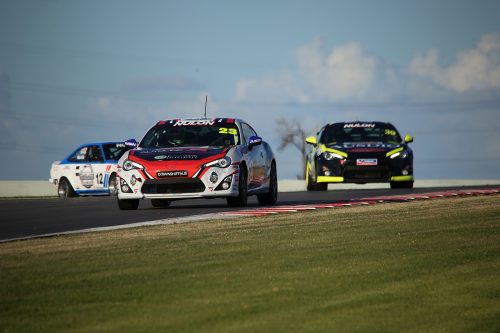 George Gutierrez racing his No. 23 IPRA Toyota 86 at Tailem Bend

Gutierrez scored a two class race wins, and two more podiums to extend his championship points lead in the state level category. Form he is hoping will carry over when he heads to the tricky street circuit in Northern Queensland also for the first time.

“I’m really pleased with our first weekend at the new Tailem Bend circuit. It was great to be able to turn laps at the circuit and build up my home track advantage before we race there in the Toyota 86 Racing Series alongside the Supercar round in August.” said Gutierrez.

“It was also great to win on debut with our new Stolz brake package which proved faultless all weekend.”

With fresh confidence, the South Australian has now turned his attention to once again racing on the national stage.

“All focus has now turned to the long trip up to Queensland.” Gutierrez continued.

“Although is a new track for myself again, I feel somewhat comfortable having raced at a street circuit previously.”

“Those concrete walls can be extremely intimidating. But I’m hoping to continue our form from the first round, keep a clean nose and keep collecting those championship points.”

Gutierrez would also like to welcome new sponsor Downshift Aus who joins the team for the for the second round of the Toyota 86 Racing Series. However, the trip to Townsville is an expensive one and the team are still on the lookout for additional minor sponsors for the event.

The next round of the Toyota 86 Racing Series will be held in Townsville on July 6-8.

George would like once again to thank all his sponsors for their continued support:

Get in touch for High-Resolution Photos for Media Use